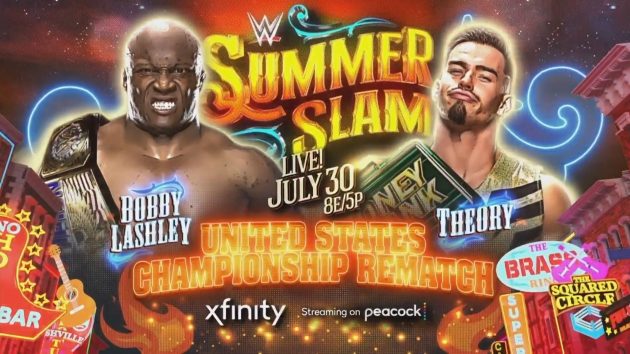 WWE SummerSlam 2022 is set to air on WWE Network and Peacock. We’re also looking for reader participation, with viewers offering their own predictions in the comment section below. While we aim to provide WWE’s preview for upcoming major events here and in similar posts on a regular basis going forward, we do have a more readily updated events page that covers these shows, plus cards for weekly content which can be seen here.

WWE SummerSlam 2022 is set to air on WWE Network and Peacock this Saturday. More specifically, the special will air on Sunday, July 30th, 2022. The event is scheduled to begin at 8 PM EST with a Kickoff show beginning at 7 PM EST and it’ll feature top stars from both brands, multiple title matches, a major Last Man Standing bout, and more. 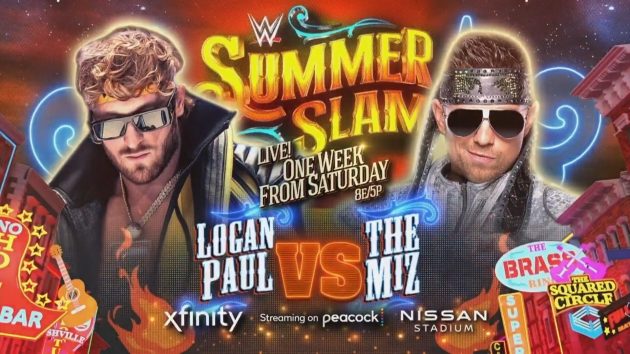 Below is the match graphic and WWE.com preview for each match: 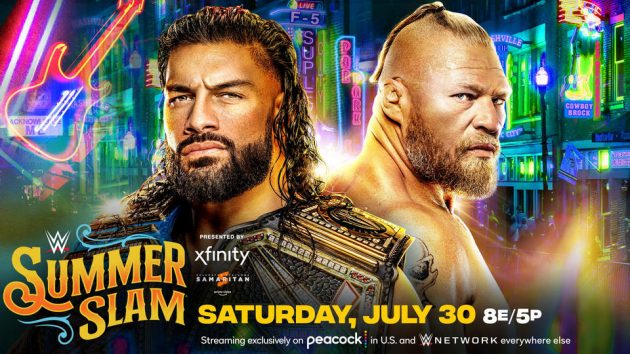 The Beast is back, and he’s looking to knock Roman Reigns off the top of the WWE mountain.

The Head of the Table toppled Brock Lesnar at WrestleMania 38 to unify the titles and make history as the first-ever Undisputed WWE Universal Champion. In their first showdown of 2021, Reigns used an assist from Paul Heyman to battle off the title challenge from Lesnar at Crown Jewel. Now the two goliaths are set to clash for a third time in a Last Man Standing Match at SummerSlam.

The leader of The Bloodline successfully defended his Undisputed WWE Universal Championship against Riddle on the blue brand, but the return of Lesnar shook the WWE Universe to its core.

Who will stand above the wreckage when Reigns and Lesnar meet in Nashville at The Biggest Event of the Summer?

Find out at SummerSlam, streaming live on Saturday, July 30, at 8 ET/5PT on Peacock in the United States and WWE Network everywhere else. 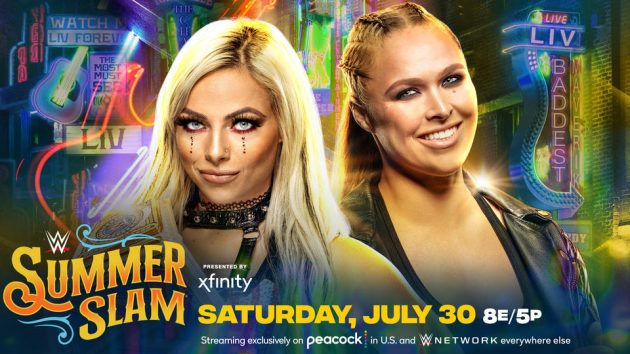 At SummerSlam, Ronda Rousey will look to dethrone new SmackDown Women’s Champion Liv Morgan in what promises to be a slugfest!

There are few competitors as devastating as The Baddest Woman on the Planet. The former Raw Women’s Champion reemerged after taking time off to become a mom, and it wasn’t long before she made Charlotte Flair scream “I Quit!” to claim the SmackDown Women’s Title. As the fans took in the start of her reign, it seemed unlikely that anyone else would be holding the title for a long time.

That all changed in one fateful night on July 2, however, when the determined Morgan rose above the competition to win the Money in the Bank Ladder Match and seize the contract for a championship opportunity.

Later that night, Morgan emerged just moments after Rousey’s epic title retention over Natalya and cashed in on The Rowdy One. After getting trapped in Rousey’s debilitating ankle lock for several edge-of-your-seat seconds, Liv suddenly kicked herself free and rolled up Rousey to secure the three-count and her first championship!

Can Liv defeat Rousey when she is at full strength? Find out at SummerSlam, streaming LIVE on Saturday, July 30, at 8 ET/5 PT on Peacock in the United States and on WWE Network everywhere else. 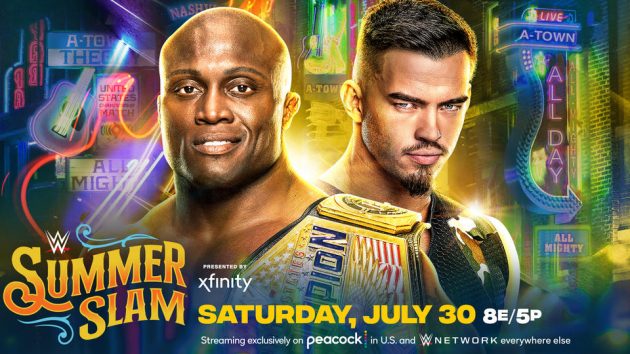 Theory will receive his rematch against Bobby Lashley for the United States Championship at The Biggest Event of the Summer.

In their match, Lashley got payback by dismantling the young upstart, with Theory operating on defense throughout the match.

At the Premium Live Event, The All Mighty captured his third United States Championship while Theory became the youngest Mr. Money in the Bank ever by winning the Money in the Bank Ladder Match as a surprise entrant.

Now that they’re both seemingly in better positions, will Theory fare better than he did at WWE Money in the Bank, or will The All Mighty dismantle Theory once more? Find out at SummerSlam, streaming live Saturday, July 30, at 8 ET/5 PT on Peacock in the United States and on WWE Network everywhere else. 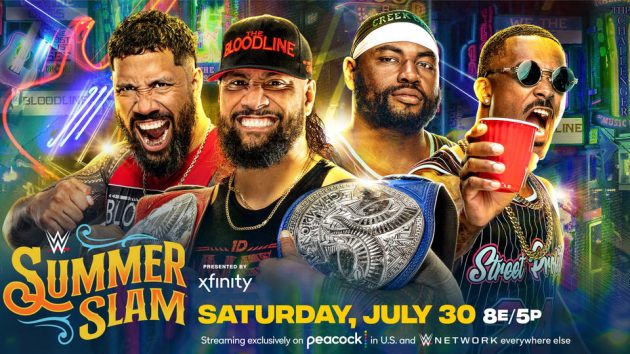 Undisputed WWE Tag Team Champions The Usos say there isn’t a team in WWE who can beat them. After a controversial finish to their recent title matchup against The Street Profits at WWE Money in the Bank, however, their status as “Undisputed” has now come into question. And that question will be settled, one way or the other, in a rematch at SummerSlam with Special Guest Referee Jeff Jarrett!

The Usos have been on an absolute tear since becoming champions, overcoming the best that SmackDown has to offer in their record-setting reign, including unifying the Raw and SmackDown Tag Team Championships against RK-Bro and emerging victorious in a close battle with Shinsuke Nakamura & Riddle on the blue brand.

Although Jimmy & Jey also officially retained the tag team gold against explosive former titleholders Montez Ford & Angelo Dawkins at the WWE Money in the Bank Premium Live Event, a replay showed that Ford’s shoulder was clearly off the canvas before the three-count.

At The Biggest Event of the Summer, The Street Profits will be up and looking to both knock The Usos down a peg and finally lay claim to the Undisputed Tag Team Title. Can Ford & Dawkins take back the the championship gold, or will another climb to “Mount Bloodline” knock the wind out of them once and for all?

Find out at SummerSlam, streaming LIVE on Saturday, July 30, at 8 ET/5 PT on on Peacock in the United States and on WWE Network everywhere else. 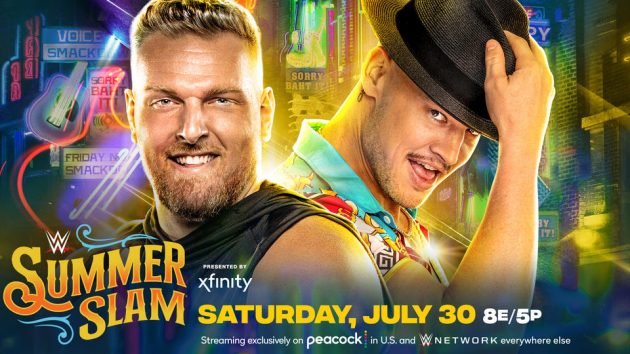 It will be no laughing matter when Pat McAfee tangles with Happy Corbin at SummerSlam!

McAfee’s issues with Corbin became apparent on the June 17 edition of SmackDown. Just moments after losing a Last Laugh Match against Madcap Moss, an irate Corbin attempted to take out his frustrations on the blue brand announcer. In response, the outspoken McAfee led the WWE Universe members in Minneapolis in laughing a humiliated Corbin right out of the arena.

The following week, McAfee challenged Corbin to a showdown at The Biggest Event of the Summer and proclaimed he was ready to feel alive. Corbin responded at WWE Money in the Bank with a brutal attack after the show went off the air and let the electric commentator know his challenge was accepted.

The passionate, fearless McAfee claimed an eye-opening win against Theory at WrestleMania, but will he have what it takes to overcome the former King of the Ring, Mr. Money in the Bank and United States Champion?

Find out when SummerSlam streams LIVE on Saturday, July 30, at 8 ET/5 PT on Peacock in the United States and WWE Network everywhere else! 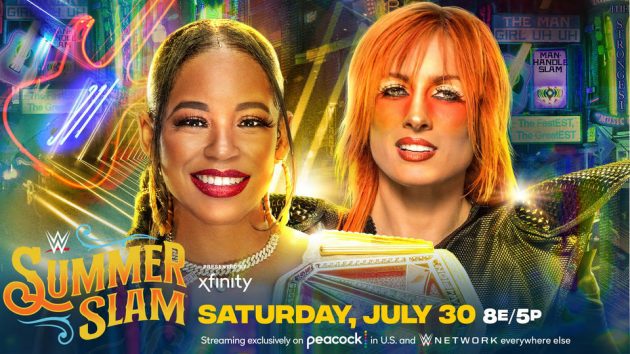 At SummerSlam, Bianca Belair will battle Becky Lynch in a highly personal showdown for the Raw Women’s Championship.

Since her triumphant victory over Lynch to capture the Raw Women’s Championship at WrestleMania 38, her second Women’s Title captured on The Grandest Stage of Them All, Belair has been a dominant force atop the Raw mountain.

All the while, an unpredictable Lynch has become simply unhinged in her quest to regain gold, whether engaging in a chaotic rivalry with Asuka, battling in a Triple Threat Match at WWE Hell in a Cell or fighting tooth and nail in the Women’s Money in the Bank Ladder Match.

Big Time Becks continued to get inside the head of the reigning titleholder when she interfered with Belair’s Raw Women’s Title Match against Carmella on the July 11 episode of Raw to give The Most Beautiful Woman in All of WWE a victory by count-out.

After The EST of WWE corrected that loss with a victory over Mella in a title rematch the following week, the path was set for Belair to take on The Man at The Biggest Event of the Summer.

Last year at SummerSlam it was Lynch’s shocking return that derailed Belair’s first title reign. Can The EST get payback in front of her home state crowd in Nashville?

Don’t miss the epic Raw Women’s Title showdown at SummerSlam, streaming LIVE Saturday, July 30, at 8 ET/5 PT on Peacock in the United States and on WWE Network everywhere else. 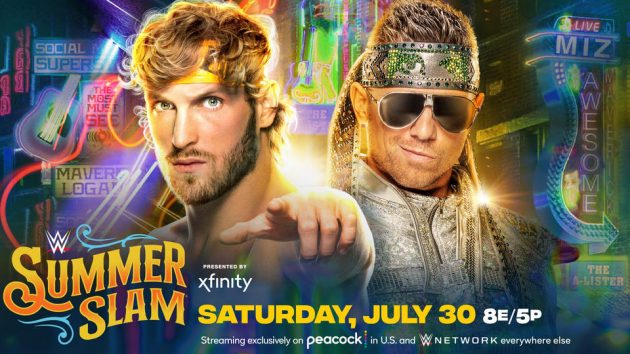 After being successful teammates at WrestleMania, Logan Paul and The Miz will clash in a star-studded match at SummerSlam.

Following their win over the Mysterios at The Showcase of the Immortals, The A-Lister shockingly turned on his partner, delivering a Skull-Crushing Finale to the YouTube sensation.

Ever since then, Paul has been training for a showdown with Miz, inking a WWE deal on June 30. The Miz did not take kindly to this news, insisting they team up again at SummerSlam, wanting no part of a singles match.

Once Paul signed on the dotted line, he made it clear he’s on a warpath to a clash against The Awesome One, belittling and goading The Miz into accepting his challenge. On the July 18 edition of Raw, The Miz finally accepted Paul’s challenge after a surprise ambush with Ciampa backfired.

With the two A-Listers inside the ring at SummerSlam, no doubt sparks will fly and the action will be white hot. Will Paul gain retribution for The Miz’s betrayal at WrestleMania or will The Awesome One prove he is the bigger star? Find out at SummerSlam, streaming live Saturday, July 30, at 8 ET/5 PT on Peacock in the United States and on WWE Network everywhere else. 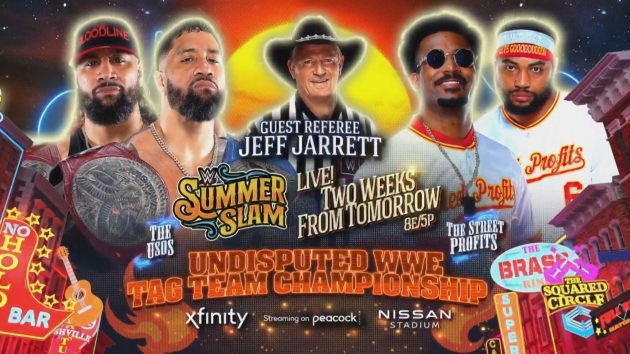 Below is a quick card for WWE SummerSlam 2022:

So, what do you think? Who do you see winning each of the matches? Will you be checking out this show? Let us know your thoughts down in the comment section below. 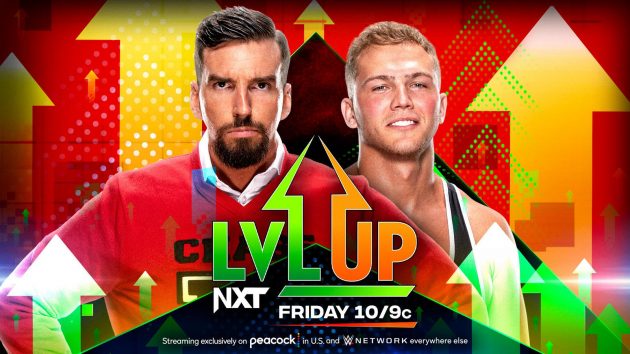 By Steve Coulson / September 23, 2022
Sometimes, there is WWE Network news that either doesn’t warrant a post of its own, or there simply isn’t time to get to it due to... By Steve Coulson / September 23, 2022
The newest edition of WWE Table For 3 is now available to be viewed anytime on demand on WWE Network and Peacock. This new edition of... 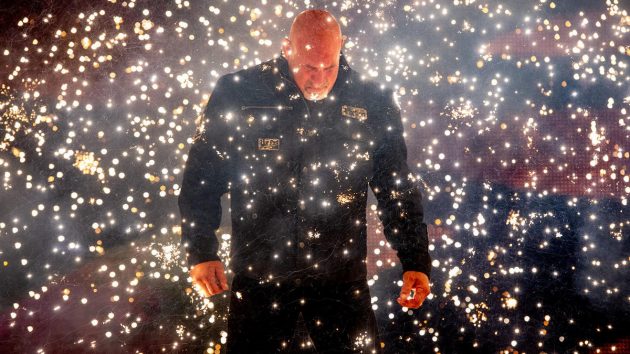 By Steve Coulson / September 27, 2022
New programming is coming to WWE Network and Peacock this weekend. A new compilation is set to be added to both platforms highlighting "the extreme". Additionally,... By Steve Coulson / September 25, 2022
Every week we receive original content, typical WWE Network and Peacock programming, plus archived content. Thanks to our affiliated WWE Network reddit owner TonyG, who also runs the WWE... 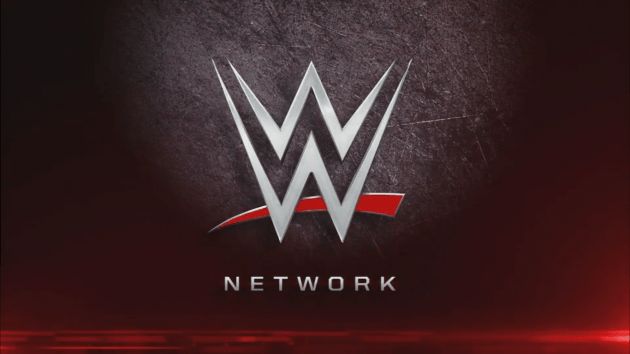 By Steve Coulson / September 28, 2022
WWE has announced that beginning in 2023, BINGE will become the streaming home for WWE Network in Australia as part of a new deal between World... 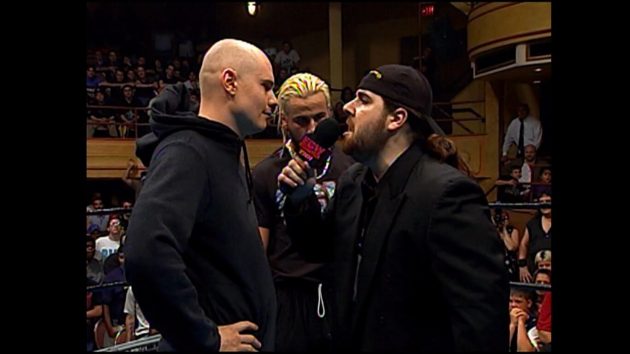 Throwback Thursday: ECW on TNN aka ECW Wrestling (Sept. 1, 2000), As Seen on WWE Network and Peacock

By Brock Allen / September 22, 2022
This week Throwback Thursday takes a walk on the “extreme” side of the WWE Network and Peacock vault when we revisit one of the final... By Steve Coulson / September 22, 2022
As a daily feature, WWE Network News posts a comprehensive list of everything that took place on this day in wrestling history. Or at least everything... 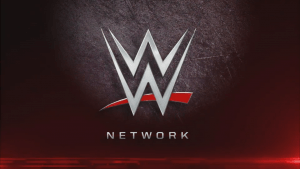 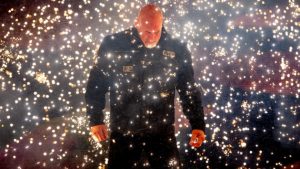 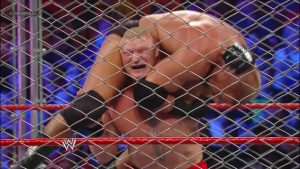