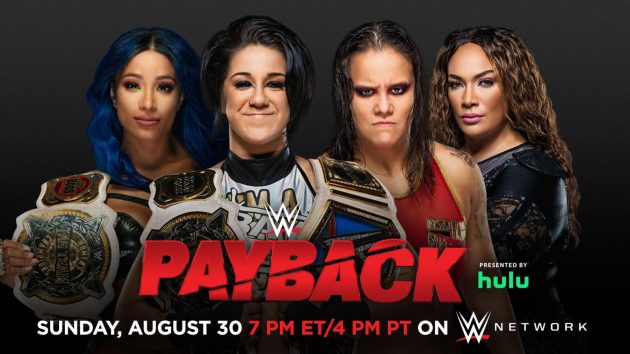 WWE Payback 2020 aired tonight on the WWE Network. The big event featured contests from the RAW and Smackdown with the two brands coming together on this major event. Some feuds highlighted were months in the making and rekindled while others have been heavily promoted as of late, and all led to tonight.

These matches featured a wealth of top stars including stars from both of the aforementioned brands. RAW talent featured includes Seth Rollins, Dominik Mysterio, Rey Mysterio, Murphy, Bobby Lashley, Nia Jax, and numerous others. Meanwhile Smackdown talent included the likes of Sasha Banks, Bayley, The Fiend Bray Wyatt, Roman Reigns, Big E, Matt Riddle, and many more. The night saw titles defended and big moments. With that all being said, we’ve got to know: what was your favorite match?

Personally, I have to go with the tag match between the Mysterio family against Seth Rollins and Murphy. While I think a few matches are in the running, including Keith Lee vs. Randy Orton despite the length, I can’t turn away from that tag action and the story it told.

So, what do you think? Was the contest between Matt Riddle and Baron Corbin? Or maybe it was the Mysterio tag match. Perhaps it was another battle from the RAW brand? Or maybe something completely unexpected stole the show for you and was your match of the night! Let us know your favorite match by voting in the poll below and remember to give more feedback on the event itself and specifically that match you selected in the comments section down below.